Trishala Dutt’s Heartfelt Birthday Note For Sanjay Dutt: Actor Sanjay Dutt recently turned a year older and received a ton of wishes from friends and family. In fact, postings wishing the actor a happy birthday on his special day caused quite a stir recently on social media. The Munnabhai MBBS actor was overwhelmed by love and wishes from his fans. Amid all these wishes, was a special birthday message by the actor’s daughter, Trishala.Also Read – Sanjay Dutt Pens Heartfelt Post on Ranbir Kapoor Getting Trolled For Shamshera: ‘Kucch to Log Kahenge’

Trishala Dutt, who penned a loving note for her actor-father on his 63rd birthday, has now made her social media account private. She wrote, “Happy Birthday my lion king @duttsanjay. Keep shining for me, Keep shining for us all. I love you so very much Papa,” alongside several emojis. Also Read – Trishala Dutt is Brighter Than Fire in Sexy Orange Midi Dress With Cowl Neckline – Hot Pics 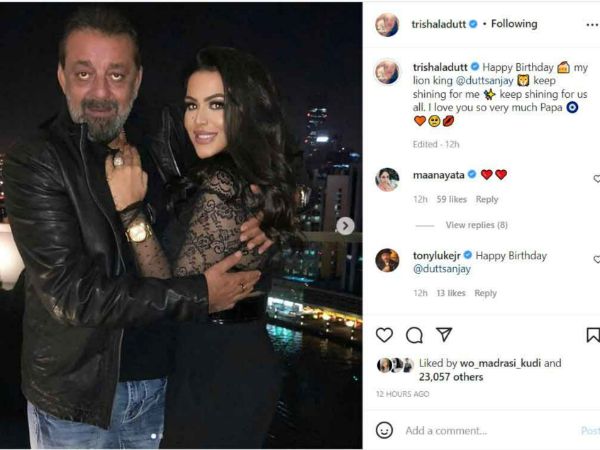 The father-daughter duo looked amazing as they twinned in black. The post garnered instant attention from fans and followers. Even Maanayata Dutt dropped two heart emojis on the post.

On the professional front, Sanjay Dutt most recently appeared in the commercial failure Shamshera, which also starred Ranbir Kapoor and Vaani Kapoor. Prior to it, he appeared in Prithviraj with Manushi Chhilar and Akshay Kumar. He appeared alongside Yash and Raveena Tandon in the blockbuster KGF: Chapter 2.

Watch this space for more updates on Sanjay Dutt!