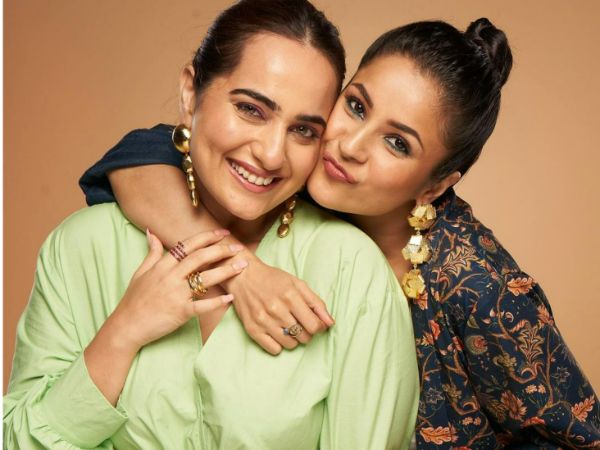 Mumbai: Actor Shehnaaz Gill is a popular face in the industry, thanks to her innocence, simplicity and charm. She rose to stardom with her stint on the reality TV show Bigg Boss 13. The actor, who is doing great for herself with multiple photoshoots and collaborations, is all set to make her Bollywood debut with Salman Khan’s Bhaijaan formerly titled Kabhi Eid Kabhi Diwali. Shehnaaz enjoys a massive fan following who call themselves ‘Shehnaazians’ and are in for a treat. The actor has been roped in to promote Masaba Gupta’s Netflix series Masaba Masaba season 2. Soon after her collaborations video with designer Masaba Gupta, the actor met fashion influencer Kusha Kapila, who is an essential part of the show.Also Read – Stranger Things Star Joseph Quinn Jams With Metallica

Kusha Kapila shared pictures on her Instagram and captioned them, “Just Nicole planning a collab of her client, @masabagupta and @shehnaazgill thanks for being so warm, Shehnaaz and posing for these pictures. Update: to all the fanclubs of Shehnaaz, y’all have always been so nice to me in the past and I hugely appreciate it. Shehnaaz was extremely warm as I have mentioned and she posed for these pictures ekdum turant. I didn’t ask for a reel or a collab because it was such a sweet moment and why ruin it, right? That was not even the point, tbvh. It was a meeting long due and I am just glad it happened.” Also Read – Neena Gupta Admits She Said Sorry to Masaba For Not Letting Her Act: ‘She Has a Lot of Potential as an Actor’

Fans flooded the comment section with immense love and admiration for the two. Looks like Kusha’s caption really got Shehnaazian emotional. They dropped heart emojis for the duo. One of the users wrote, “Oh my god my two favourite ladies in one frame.” Another user wrote, “Girls with the same energy.”

Shehnaaz Gill spoke candidly with designer Masaba Gupta about her future aspirations for marriage, her favourite actors, and much more. It was a treat to watch the boss ladies!