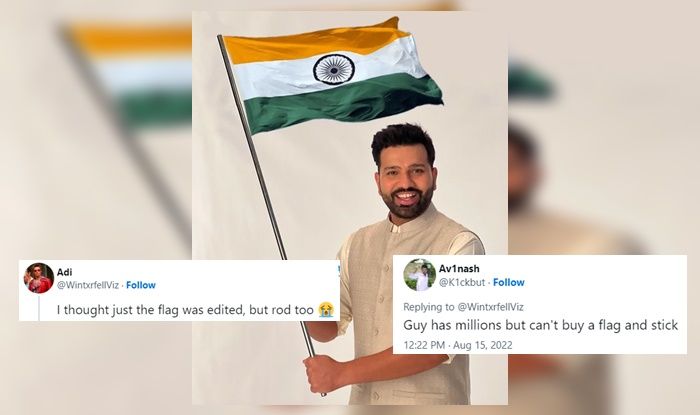 Mumbai: India captain Rohit Sharma faced the heat on social media following his Independence Day post where he wished fans on Monday. After Rohit wished the nation on social media, fans spotted that the tricolour that was used was a photoshopped version and that upset them. Along with the caption, he posted a picture where he wearing the traditional attire while holding the tricolour.Also Read – Savarkar, Tipu Sultan Flex Row: Karnataka Police Arrests 4 in Shivamogga as Tension Prevails

The fans made it a big issue on Twitter and they reacted. Here are some of the hilarious reactions to Rohit’s tricolour goof-up. Also Read – Independence Day 2022: Cinquantenaire Park in Brussels Lights Up With Tricolour

I thought just the flag was edited, but rod too 😭 https://t.co/lMvF5Vqa0P pic.twitter.com/WMVnyuFmRc

Guy has millions but can’t buy a flag and stick

Rohit is not part of the ODI squad that will play three matches with Zimbabwe in Harare. He would join the team ahead of the Asia Cup. Rohit is an important player and he would like to get among the runs ahead of the T20 World Cup which takes place in Australia later in the year.

On Monday, New Zealand Martin Guptill became the leading run-scorer on the history of T20 international cricket on overtaking Rohit (3,487 runs) with a small margin. Guptill scored 15 in the match against Windies.