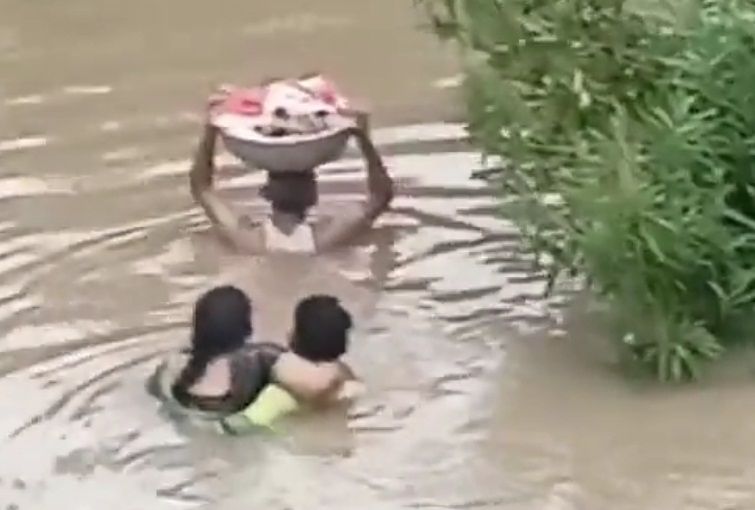 Peddapalli: Incessant rain and floods continue to wreak havoc in parts of Telangana. As the rescue operations continue in the flood-affected parts, dramatic visuals are being witnessed. In a dramatic scene strikingly similar to the magnum opus Baahubali, a man was seen carrying on his head a plastic tub with a three-month-old baby boy wrapped in warm clothes in it.Also Read – Viral Video: Boy & Girl Dance to Tum Hi Ho Bandhu, Their Chemistry Leaves Internet Impressed | Watch

Notably, a family with a toddler was stranded in the flood water. The toddler was rescued on a plastic tub carried on the head by a rescue worker in neck-deep water in Manthani town in Peddapalli district on Thursday. The family then shifted the infant to a safer place by carrying the baby in a tub. A woman, who appears to be mother of the baby, is also seen wading through the flood water with the help of another man. The video of the incident went viral on social media.

The real-life Baahubali! Man carries a months-old baby over his head in a basket in flood affected village of Manthani. #TelanganaFloods #TelanganaRain pic.twitter.com/0Y0msp8Jbp

Earlier, dramatic visuals of the rescue operation by a helicopter in Mancherial district also went viral. Two persons stranded on top of a vehicle in the flooded Godavari river were rescued by a NDRF team with the help of a helicopter.

Several villages and some towns have been left inundated by overflowing water bodies. The North Telangana region has been reeling from heavy rains with water flowing over roads, cutting off remote villages while normal life remained paralysed.

Inundation of villages and parts of some towns in the worst affected districts of Adilabad, Nirmal, Komaram Bheem Asifabad, Mancherial and Jagtiyal have forced hundreds of families to move to safer places. Heavy rainfall and floods have led to incidents of house collapse, disrupted electricity supply and caused widespread damage to crops.