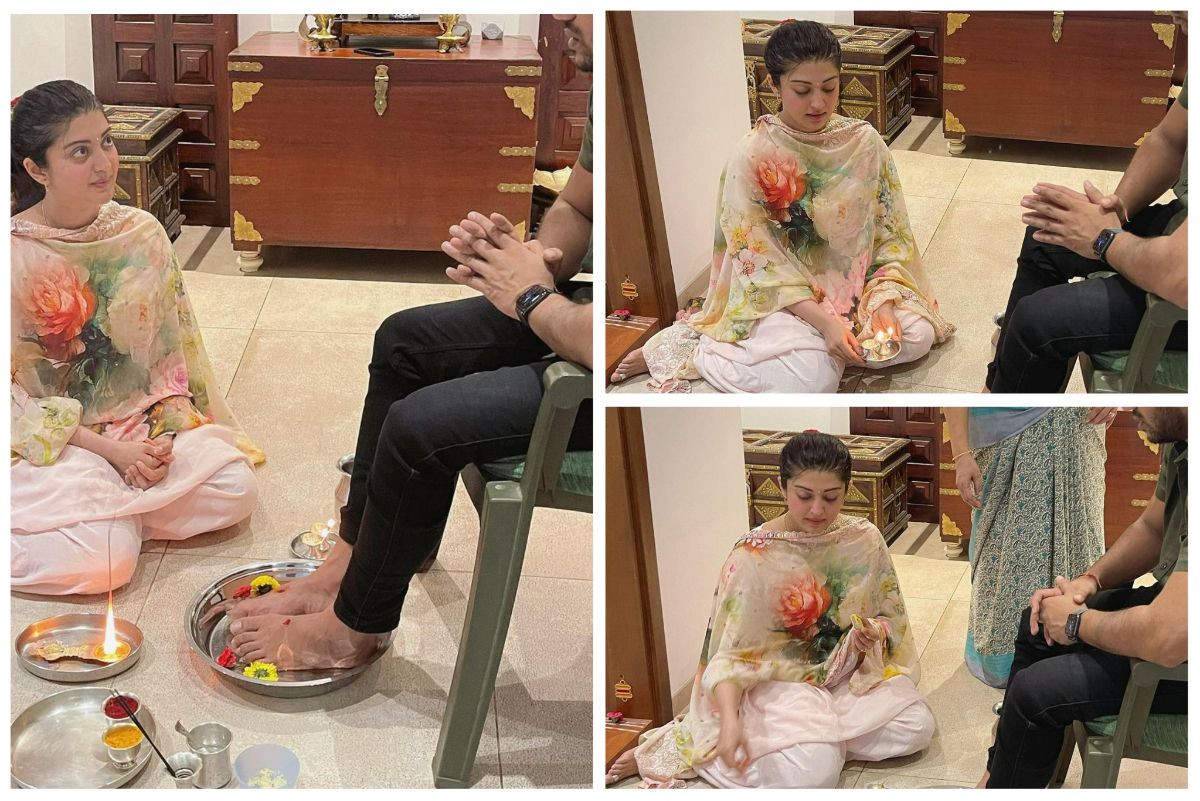 Pranitha Subhash Hits Back at Trolls Criticising Her Pic: Pranitha Subhash had recently shared a picture with husband Nitin Raju while performing the Bheemana Amavasya puja sitting at his feet. Pranitha was lauded for following her traditional customs. However, Pranitha’s pic with husband didn’t go down too well with a certain section of netizens who trolled the picture linking it with patriarchy. Pranitha had been performing a ritual married women perform during Ashada for the long life of their husband and other male members of the family. Even unmarried girls who desire to get a good husband also participate in the Bheemana Amavasya puja. Apart from feminists, Pranitha’s post could have also offended a group of netizens who may not conform to her beliefs. As the actor is often known for posting about her inclination to her traditional roots and faith.Also Read – Udaipur Beheading: Actor Pranitha Subhash Invokes ‘Hindu Lives Matter,’ Says ‘The Screams Will Haunt us’

Pranitha reacted to the whole controversy and told E Times, “Well, everything in life has two sides. But in this case, 90 per cent of the people had a good word to say. The rest, I ignore. Just because I’m an actor and the field is known for its glamour, does not mean that I cannot follow a ritual that I have grown up watching and completely believe in. All my cousins, neighbours and friends have also done it. I did the puja last year too when I was newly married, but hadn’t shared the picture then. In fact, this isn’t new to me. I’ve always been a traditional girl at heart and love anything that has do with values, rituals and family at its core. Being homely is what I’ve always liked and so is living in a joint family. Besides my parents, I’ve also grown up being surrounded by aunts, grandmothers and uncles and I like it that way. Sanatana dharma is a concept that is so beautiful and embraces one and all and I am a firm believer of that. One can be forward thinking and modern, but that does not mean one forgets one’s roots.” Also Read – Women’s Day Special: Pranitha Subhash On Her Struggle & Finally Making It Big

On being quizzed about the online debate over why it’s only the wife praying for a husband’s long life and not vice versa? Pranitha replied, “That’s hardly a point to debate about. We all pray for each other’s health and well being.”

Pranitha Subhash is an Indian actress who predominantly appears in Kannada, Telugu, Tamil, and Hindi films. She debuted as an actress in the 2010 Kannada film, Porki and also starred in Paresh Rawal and Shilpa Shetty starrer Hungama 2.

For more updates on Pranitha Subhash, check out this space at India.com.