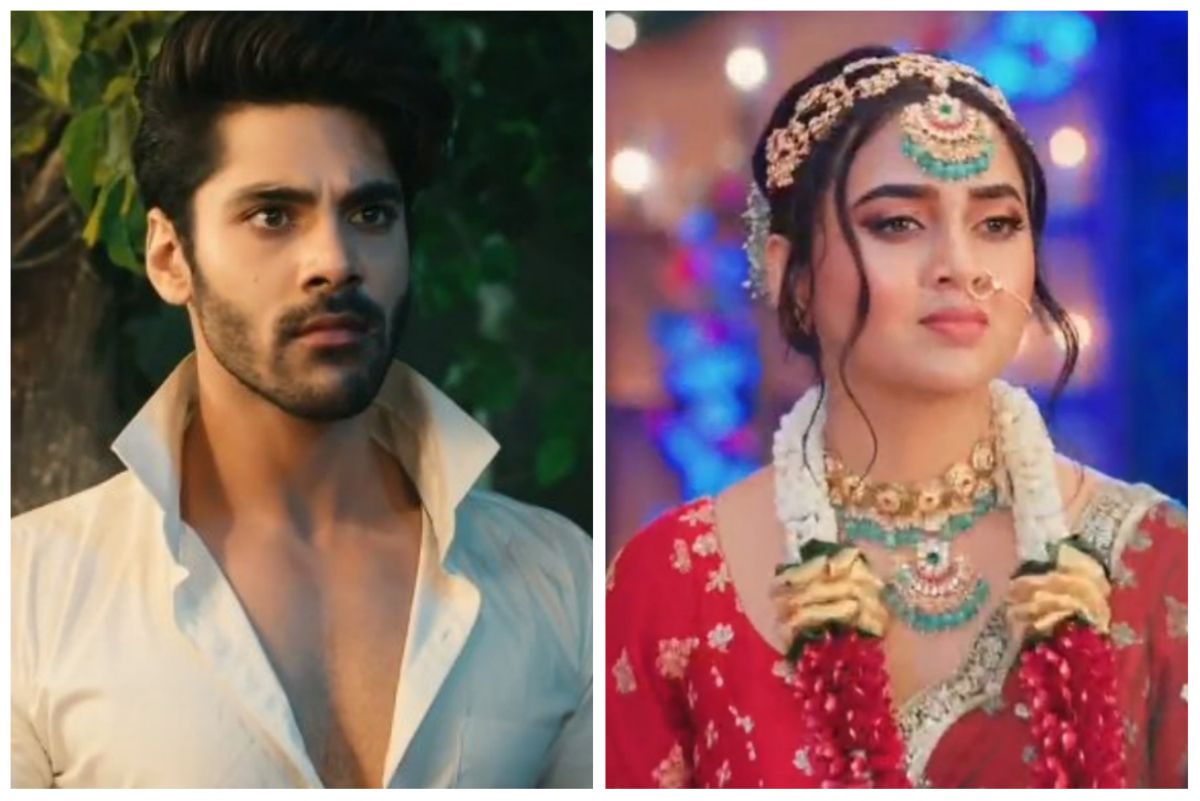 Check out this clip from Naagin 6 shared by Colors on their Instagram handle:

Kiara and Rajesh Pratap are dancing on their wedding day. while Rishabh is realizing his mistake and recalling his romantic heartfelt moments with Pratha. Kiara accidentally collides with Rishabh while he confesses that he lost his love and feels sorry about it. Kiara asks him what he’s talking about, to which he says sorry while Rajesh Pratap interrupts them and asks her to continue dancing. Divya asks Kiara to get dressed up for wedding. Rishabh gets disturbed and starts consuming liquor at the wedding. Shakti enters Pratha’s room calling her Deepika and tells her he would consummate with her. Shakti forces her on the bed but when Pratha starts shouting he tells her he won’t harm her. Shakti tells her he won’t touch her till she starts feeling the same. Urvashi hits him with a rod and he faints. Pratha transforms into Mehek.

Pratha, while getting dressed for the wedding thinks how life has changed recalling her happier days as Rishabh’s wife. Mehek calls a sub-inspector to get Shakti locked up for few days. When the police officer arrives, Mehek transforms into Naagin and takes Shakti outside secretively. Rajesh Pratap tells Kiara that the way she has been by his side, he too will stand by her forever. Kiara tells him she should thank him rather for changing her life. Rishabh watches their conversation while Reem challenges to God to stop the marriage if he really exists. Urvashi wonders how Shakti came out of the secret room and that too by breaking the iron chains. While Urvashi speaks to the sub-inspector Mehek brings Shakti outside.

The priest starts chanting mantras at Rajesh and Kiara’s wedding. Rishabh gets drunk while recalling what inspector Vijay and Rehan had said about Pratha. Gauri watches Shakti being taken away and runs to tell Pratha but Mehek sees her. Mehek turns into Naagin and bites Gauri. Gauri doesn’t turn into Naagin in order to hide Pratha’s plan and pretends to faint. As soon as Mehek and Urvashi go inside to bribe the officer, Gauri disappears as she is determined to tell Pratha to tell the truth about Shakti. Rishabh feels heartbroken to see Kiara’s wedding rituals and goes to his room.

Kiara Tells Rishabh She is Pratha

Pratha executes her plan and creates smoke at the wedding and goes away. Rishabh is  looking at Pratha’s picture when she enters his room and stabs him only to realize she was daydreaming. Rishabh sees Kiara and admits he wished Pratha was alive as he doesn’t want to live anymore. Kiara tells him she could help him and is about to stab him but can’t. Pratha tells him she has always loved him and can’t kill him. Pratha accuses him of killing her baby and betraying and goes outside the room. Rishabh’s room catches fire as the candle accidentally falls but he somehow comes out, still half drunk. While looking at the wedding he remembers he has to take Pratha’s picture from the room. The room engulfs into fire and the wedding is interrupted.

Gauri Dies in Front of Pratha

Soon everyone tries to stop the fire but it is unstoppable. Fire extinguisher is used to get rid of the fire while the whole family watches from outside the room. Gauri who disguises as Pratha at the wedding falls to the ground and comes in her real form. Pratha asks her about who did this, but she only hints at two with her fingers and dies. As the fire goes off, a person’s body wrapped in white sheet is taken out.

In the next episode it is almost confirmed that Rishabh died in the fire and Pratha comes to know about Urvashi and Mehek’s betrayal.

For more updates on Naagin 6, check out this space at India.com.