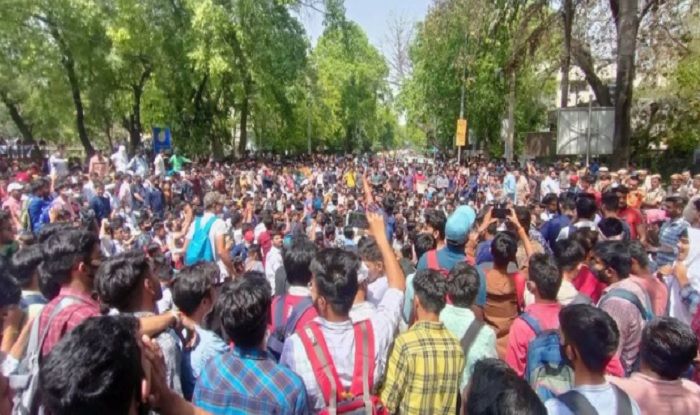 Indore: Nearly 4,000 aspirants of Madhya Pradesh Public Service Commission (MPPSC) took to streets on Friday to protest against non-declaration of exams’ results of 2019 and 2020. They also staged a Tricolour rally and sat on dharna in front of the offices of Madhya Pradesh Public Service Commission in Indore for several hours demanding jobs and protesting delays in recruitment.Also Read – Kishore Kumar’s Fans in Indore Seek Bharat Ratna For Him, Want Khandwa Home to Be Declared Heritage Site

The agitators marched around 8km from Bhawarkuan to the commission office as part of Berozgar Tiranga Yatra and also demanded the release of the MPPEB recruitment calendar and declaration of results of PSC-2019, 2020 and 2021 examination. Also Read – Nitin Gadkari Makes This Big Claim About Electric Buses

The aspirants assembled at Bholaram Ustad Marg (in Indore city) and marched towards MPPSC office. After reaching there, they demanded that results of 2019 and 2020 should be released at the earliest as many them are getting overage.

The protest march started around 11 AM, when 200 students began a protest rally from Bhawarkuan with Tricolours in their hands. Soon after that, hundreds others joined them at Navlakha, Holkar Science College and road squares and corners.

He said the commission is releasing recruitment advertisements, conducting exams, and declaring results and the final results will be declared after a decision from the high court on the reservation issue.

In the meantime, the coaching centres were also closed and the students preparing for MPPSC and other government exams also joined the protest.

The aspirants said the elections are held in 15 days and results would declare within five days, but MPPSC exams held after a gap of four years and then the matter gets pending the court.

It must be noted that the matter of MPPSC’s results for the exams conducted in 2019 and 2020 are before the Madhya Pradesh High Court. People aware closely following the matter said the results are pending for the last three-and-a-half-year due to the OBC reservation issue.