Filmmaker Karan Johar who recently announced the final wrap of his upcoming directorial film ‘Rocky aur Rani Ki Prem Kahani,’ on late Tuesday night, shared two cryptic notes which have left the fans baffled. Soon after the 50-year-old shared the notes, fans seemed concerned about him and wanted to know, what has happened to the ‘Ae Dil Hai Mushkil’ director. The actual reason behind this cryptic message is still unknown!Also Read – Aamir Khan Schools Karan Johar on Discussing Other Celebs’ Sex Lives on Koffee With Karan 7 – Watch

Taking to Instagram, the ‘Kuch Kuch Hota Hai’ director wrote in his story, “Sensitivity is a two way street…” 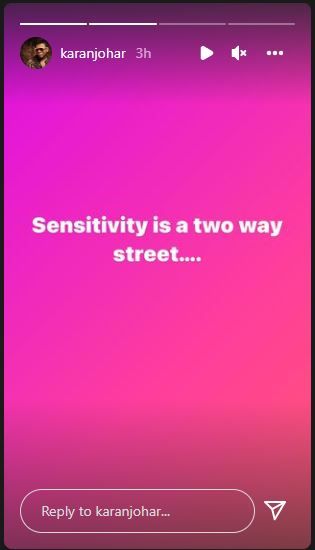 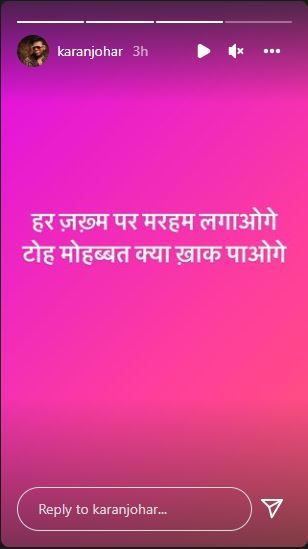 Meanwhile, Karan recently announced the final wrap of his upcoming directorial film ‘Rocky aur Rani Ki Prem Kahani’ with a special video. “It’s a talkie wrap on a piece of my heart…a kahani that became a journey which I will hold close to me forever! I sat in the director chair after many years and it felt like coming home. We had legends and superstars on the set and in front of the camera – they were magic! Behind the camera, it was nothing short of magic either with my A-team, my pillars of strength. Thank you to everyone who worked tirelessly and passionately towards this kahani…I am forever grateful,” he captioned.

In the video, the whole team of ‘Rocky Aur Rani Ki Prem Kahani’ is seen celebrating the film’s wrap. Alia, who had already wrapped her schedule last week, joined Ranveer and the film’s crew via a video call.

Apart from ‘Rocky aur Rani Ki Prem Kahani’, Karan’s upcoming production ‘Brahmastra Part One: Shiva’ is also creating a lot of buzz and makers are soon going to release their second song after their much popular hit track ‘Kesariya’.

‘Brahmastra’ stars Ranbir Kapoor, Alia Bhatt, Amitabh Bachchan and Mouni Roy in the lead roles and the film is all set to hit the theatres on September 9, 2022.