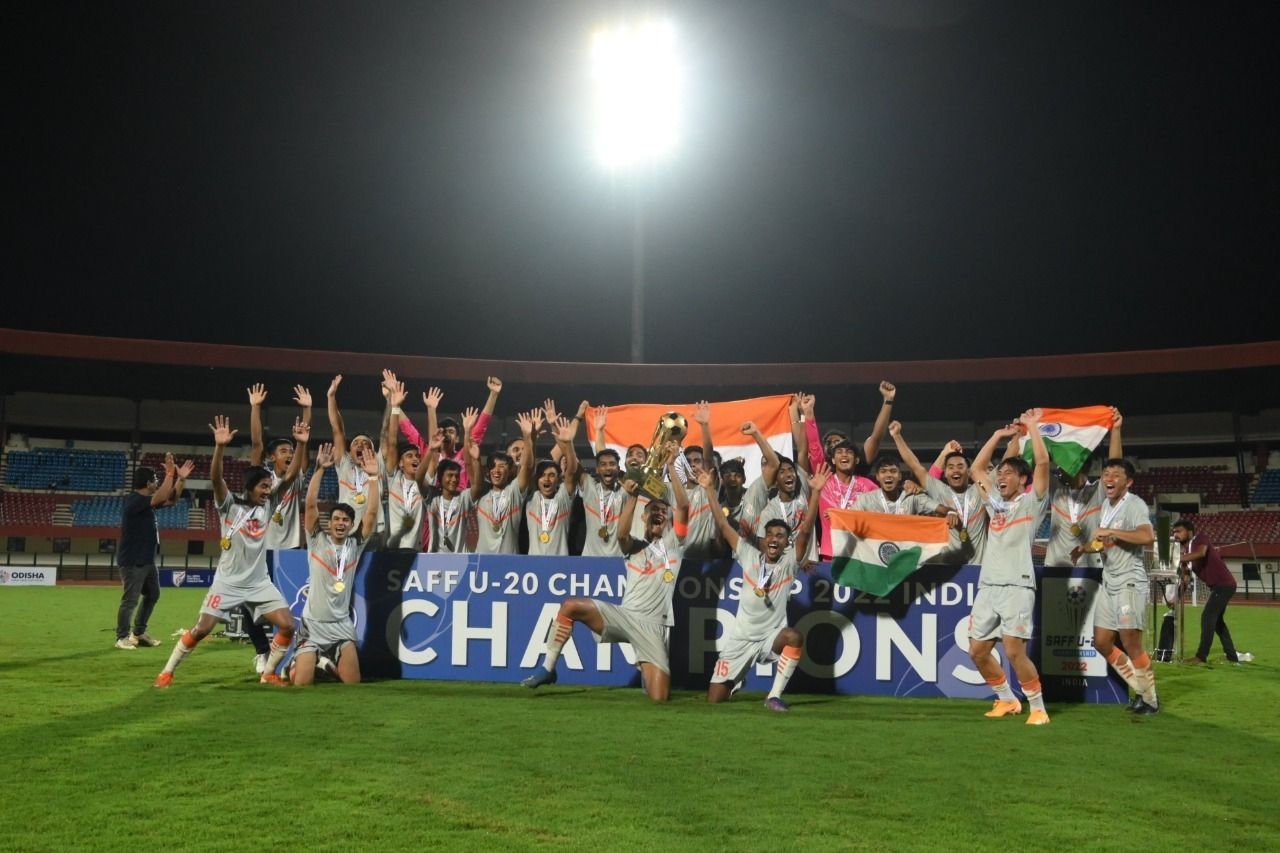 Bhubaneswar, Aug 6 (IANS) Striker Gurkirat Singh scored four goals including a hat-trick, while Himanshu Jangra scored the another as India U20 routed Bangladesh U20 5-2 in the final to emerge champions in the SAFF U20 Championship after extra time at the Kalinga Stadium, here on Friday.Also Read – Real Madrid vs FC Barcelona Live Streaming in India: When and Where to Watch Real Madrid vs FC Barcelona Friendly Football Match Online On SonyLIV; TV Telecast on Sony Ten

Both teams were locked 1-1 at the interval, and 2-2 after completion of regulation time. Gurkirat scored in the 1st, 60th, 94th and the 99th minutes respectively, while Himanshu scored in the 92nd minute. For Bangladesh, Rajon Howladar and Shahin Mia scored in the 44th and 48th minutes. Also Read – Former Manchester United Football Star Wayne Rooney Joins MLS Side D.C United As Head Coach

The intent was positive, and despite the Indians creating chances all throughout, they stayed guilty of being a bit complacent wasting quite a few. Rival goalkeeper Md. Asif also made it difficult for the blue colts on certain occasions. Some timely substitutions from Head Coach Shanmugam Venkatesh also aided the team’s plan. Also Read – FIFA World Cup 2022: FIFA to Introduce Semi-Automated Off-Side Technology in Qatar

Drama unfolded right after kick-off as India U20 were awarded a penalty within 20 seconds. Himanshu Jangra collected a long pass from the right, sidestepped his marker and unleashed a long ranger which rival goalkeeper Md Asif managed to block diving low to his right.

Gurkirat lurking around was faster to react to the rebound. Asif, in his desperate attempt to keep Gurkirat off, brought the Indian striker down inside the box. Gurkirat gleefully converted from the spot to put India into an early lead.

Not willing to surrender the early lead, and also not willing to sit back and defend all throughout — slowly but steadily India’s attacking prowess created quite a few chances. But they weren’t able to take advantage.

In the 21st minute, rival defender Shahin Mia exceptionally timed his tackle to deny Himanshu from getting into the box. Four minutes later, Gurkirat being chased by the entire defence deftly stopped it at the edge of the box, and spotting Asif out of his line, tried to lob it. But it went over.

The lead should have been doubled in the 32nd minute in what was the easiest chance of the half. But even as Gurkirat cut in from the right, and despite being unchallenged and all in the clear, he failed to slot home. Taison Singh also missed by a whisker in the 43rd minute.

The curse of missing chances hit India hard as Bangladesh restored parity at the stroke of interval – Rajon Howladar’s shot evading the jungle of legs and bulging the net.

Changing over, Bangladesh took the lead within three minutes. Amandeep mistimed his clearance off a harmless free-kick and it fell to Shain Mia whose rasper hit the post, and rolled in.

The first substitution for India came in the 57th minute – Tankadhar Bag coming in for Maheson Singh – and a series of chances fell India’s way thereafter. The equaliser came within three minutes when a clearance fell to Gurkirat just outside the box and he banged it in, this time with his right foot in the 60th minute.

In the 63rd minute, Himanshu chased it into the box but was unable to flick it in – an onrushing Asif clearing the danger for Bangladesh. And in the 67th minute, Himanshu’s placement past Asif was a bit feeble, allowing Azizul Haque to make a goal line clearance. Asif was also in the thick of action when he dived to clear Bikash Yumnam’s curling centre.

Head Coach Shanmugam Venkatesh brought in Harsh Patre in place of Taison Singh. Asif came up with the save of the tournament in the 89th minute saving a blinder – when his reflexes denied Brijesh Giri’s back-heel from entering the net.

India took the lead in the second minute of extra-time (92nd minute). Himanshu followed up a Harsh Patre delectable defence splitting pass, and finished it with a first-time left-footed finish.

Gurkirat completed his hat-trick in the 94th minute – this time Himanshu turned the provider, sending Gurkirat through. The latter rounded past Asif and scored from a narrow angle. The 5th goal for India came in the 99th minute – Gurkirat scoring off another screamer. He turned past a couple of defenders and blasted it home from around 30 yards.

Prior to the kick-off, Chief Minister of Odisha Shri Naveen Patnaik met both the teams.

Gurkirat Singh was declared the Most Valuable Player of the tournament and also clinched the top scorer’s award, while Som Kumar earned the Golden Gloves Award.