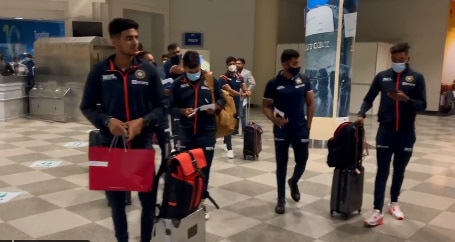 Harare: A couple of days ahead of the opening game, KL Rahul-led Indian cricket team arrived in Harare on Saturday evening. While some of the players were wearing the mask, others chose not to. The side would get a day to practice and get used to the conditions. The Zimbabwean cricket Twitter handle posted a clip where the Indian players are in the Harare airport. The post was captioned: “They are here now . . . 🇮🇳 have just landed in Harare ahead of the three-match ODI series against 🇿🇼 scheduled for 18, 20 and 22 August at Harare Sports Club.”Also Read – Virat Kohli in Same Bracket as Tiger Woods, Muhammad Ali: Zimbabwe’s Sikander Raza’s HUGE Praise For Ex-IND Captain

They are here now . . . 🇮🇳 have just landed in Harare ahead of the three-match ODI series against 🇿🇼 scheduled for 18, 20 and 22 August at Harare Sports Club #WelcomeIndia | #ZIMvIND | #VisitZimbabwe pic.twitter.com/lViHCYPSPL

The BCCI selection committee had a few days back named India’s 16-member squad for the 3 ODIs against Zimbabwe to be played from August 18-22. National Cricket Academy head VVS Laxman has been appointed the acting head coach of the Rahul-led side for the Zimbabwe series. Also Read – IND Tour of ZIM: KL Rahul & Co. Leave For Zimbabwe For ODIs ; Check VIRAL Pics

Rohit Sharma, Virat Kohli, Jasprit Bumrah and Rishabh Pant are not a part of the touring squad. They would be joining the side for the Asia Cup. The Zimbabwe series would be an opportunity for a few upcoming stars to cement their spots in the side.