Bonalu Festival Hyderabad 2022: As this incredible India does not leave any opportunity to amaze us, here is another tid-bit about the vast diversity of this country. The southern state of Telanga is presently celebrating the famous Bonalu festival. The twin cities of Hyderabad and Secunderabad go through absolute madness during July-August as the annual festival of Bonalu is celebrated with intense fun, frolic and fervour. This year, the festival began on July 3 and will go on through July 24.Also Read – Gold Rates Today: Check Price of Yellow Metal in Your City on August 02, 2022

Here is Everything You Need To Know About Bonalu Festival: 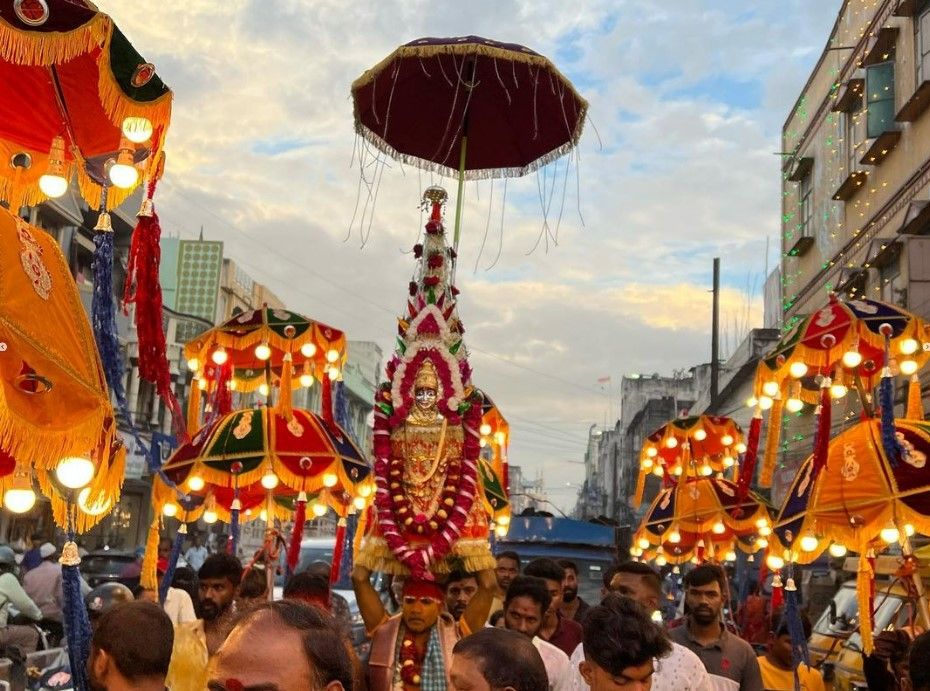 Bonalu is a Hindu festival where Goddess Mahakali is worshiped. The festival is celebrated usually during Ashada Masam (July-August). Special poojas are held for various versions of the Goddess Mahakali in different parts of the state but primarily the avatar Yellama of the Goddess is worshipped. Also Read – Viral Video: Biryani Vessel Floating On Hyderabad Streets Leaves Internet In Splits| Watch Here Why

Bonam means a feast or a meal in Telugu, an offering to the Goddess, cooked with milk, jaggery in an earthern or brass pot. The pot is decorated with turmeric, Neem leaves and vermillion. Women carry these pots on their heads and make an offering of Bonam, including Bangles and Saree to the Mother Goddess at Temples. Bonalu involves worship of Kali in her various forms such Mysamma, Pochamma, Yellamma, Dokkalamma, Pedamma, Poleramma, Ankalamma, Maremma, Nookalamma etc. Also Read – Uma Maheshwari, Ex-Andhra CM NT Rama Rao’s Daughter Found Dead at Hyderabad Home

How Did The Festival Originate? 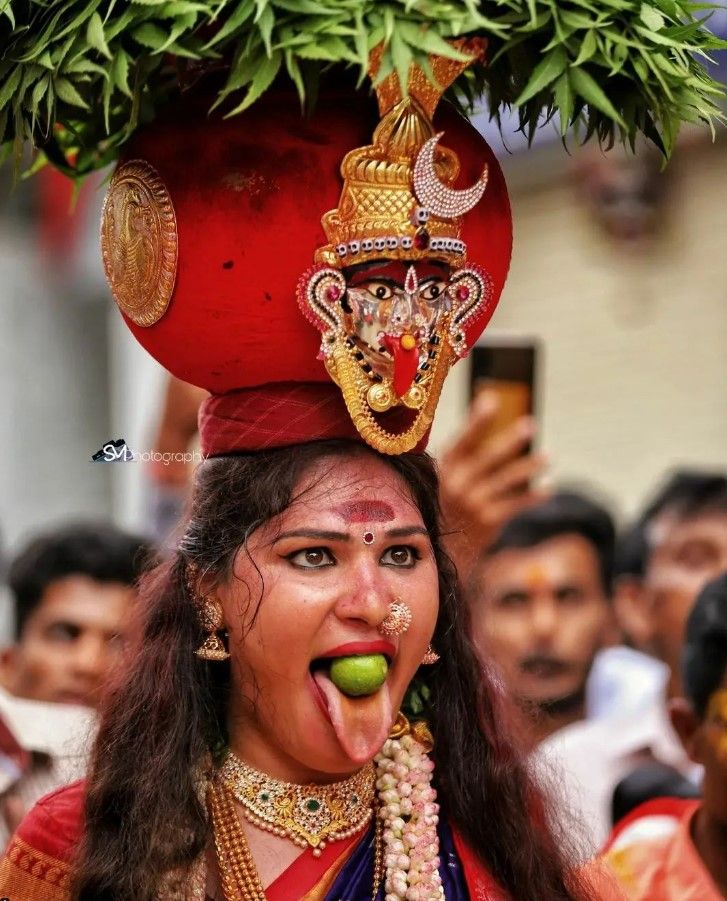 Women dress up as Goddess Mahakali and act as possessed by spirit of Mahakali. Picture Credits: heyyy_hyderabad/instagram

The festival historically started in 1813 in the region of Hyderabad & Secunderabad when plague gripped the twin Cities and had claimed thousands of lives. A military battalion from Hyderabad was then deployed to Ujjain and concerned about the plague menace in Hyderabad, the battalion offered prayers to Mother Goddess at Mahankaali Temple in Ujjain, Madhya Pradesh. They wished for the recovery of their people back home and if they were releived of it soon, they would install an idol of Mahankaali in Secunderabad. It is believed by devotees that Mahankaali halted the spread of the disease. The Military Battalion came back & installed an idol by offering Bonalu to Mother Mahankaali.

On the first Sunday of Aashaadam, celebrations begin at Golconda Fort followed by Ujjaini Mahakali Temple in Secunderabad and Balkampet Yellamma temple in Balkampet on second Sunday, and on the third Sunday, at the Pochamma and Katta maisamma temple near Chilkalguda and the Matheswari temple of Lal Darwaza in Old City of Hyderabad. Other temples such as Akkanna Madanna temple in Haribowli, Muthyalamma temple in Shah Ali Banda are the popular venues where Bonalu is celebrated. Lakhs of devotees throng the temples to pay obeisance to Mahankaali.

Women dress up in the traditional Sari along with jewels and other accessories during the occasion. Teenage Girls adorn half-sarees and jewels. Some women face a spell of trace where they dance with the balancing pots to the rhythmic beats made by drums in honor of the Goddess. They dress up as Mahakali and are beleived to possessing the spirit of Mother Goddess, and when they approach temple, people sprinkle water on their feet in order to pacify the aggressive spirit. Devotees offer Thottelu–small, colorful paper structures, which are supported by sticks and offered as a token of respect. 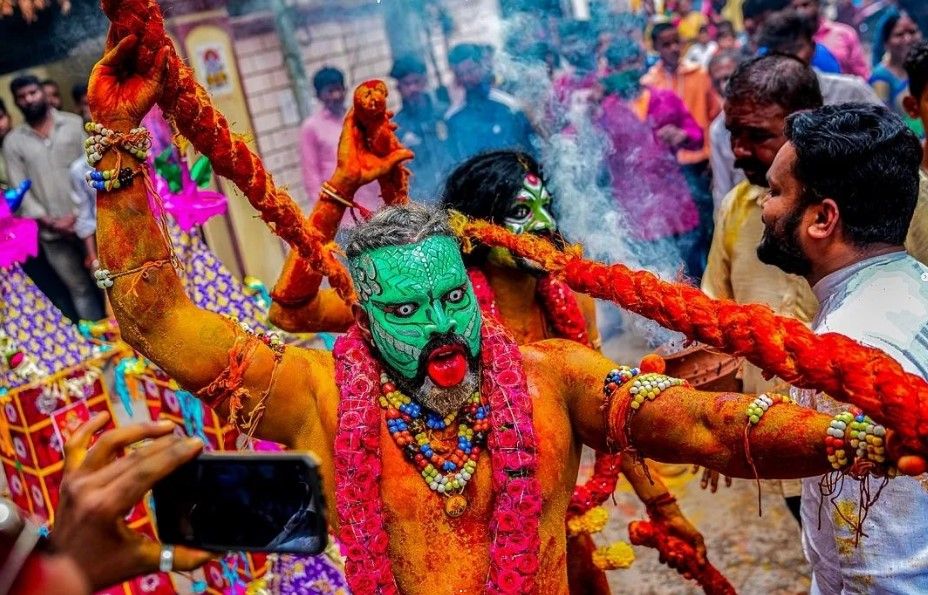 The mythological character of Pothuraj, Goddess’s brother also shows up during the performances. Picture Credits: ranjith_ry_/instagram

Pothuraju, considered the brother of Mother Goddess, is represented by a bare-bodied man, who wears a small tightly draped red dhoti and bells near ankles, and applies turmeric on his body, including vermilion on his forehead. Pothuraju dances to the beats of drums and remains the main attraction of Palaharam Bandi, the procession.

Rangam, or the Performing the Oracle, is held after the next morning of the actual festival. A Woman invokes goddess Mahankaali onto herself and performs this custom. She foretells the next year ahead when devotees ask for information about future.

Ghatam implies a copper pot, which is decorated in the form of mother goddess and carried by a priest, adorning a traditional dhoti and his body completely smeared in turmeric. The Ghatam is taken as a procession from first day of the festival to the last day, when it is immersed in water. The Ghatam accompanied by drumbeats and the procession including the performances.

Usually Ghatam of Akkanna Madanna Temple in Haribowli leads the procession, placed on an elephant inturn accompanied by mounted horses and models, which depict Akkanna and Madanna. The festival ends as a glittering procession in the evening after immersion of Ghatams at Nayapul. Ghatams from other popular temples of Mahakali in twin cities congregate here.

The festival is the light and soul of the state, describing the intensity of human emotions through the vibrancy of performances.