Brahmastra: Ranbir Kapoor and Alia Bhatt are all set to grace the silver-screen with Ayan Mukerji’s Brahmastra September 9 onwards. RaAlia fans as the netizens have nicknamed the power couple’s fan base, are all excited to see them in the fantasy drama. Brahmastra: Part One – Shiva‘s new song Deva Deva‘s teaser was released today. Alia shared a series of pictures including a throwback picture of Ranbir from the sets and mentioned his ‘best trait’ as a co-star. Alia also shared a picture of herself with director Ayan Mukerji in between the shots while prepping for a scene. The actor is currently busy with the promotional spree of her film Darlings which marks her debut as a producer. Alia held an interactive session on Instagram where she answered questions about both her films.Also Read – Alia Bhatt’s Lookalike Celesti Bairagey Bags a Film ‘Udti Ka Naam Rajjo’ – All Thanks to The Actress

Alia was quizzed by a fan who asked Ranbir’s best trait as a co-star. The actor relied with an unseen throwback photo of Ranbir from Brahmastra shoot and captioned her Instagram story as, “Ranbir is the easiest person to work with! He’s so punctual! He’s so giving as an actor! He never leaves the set! His discipline is beyond brilliant!!! Also he would make these little hearts for me in between shots!” Alia also shared a BTS still from Brahmastra featuring director Ayan Mukerji, which dates back to 2018. Also Read – Have You Heard Ajay Devgn’s Version of Kesariya? This Mimicry Artist’s Take is Too Hilarious to Miss | Watch 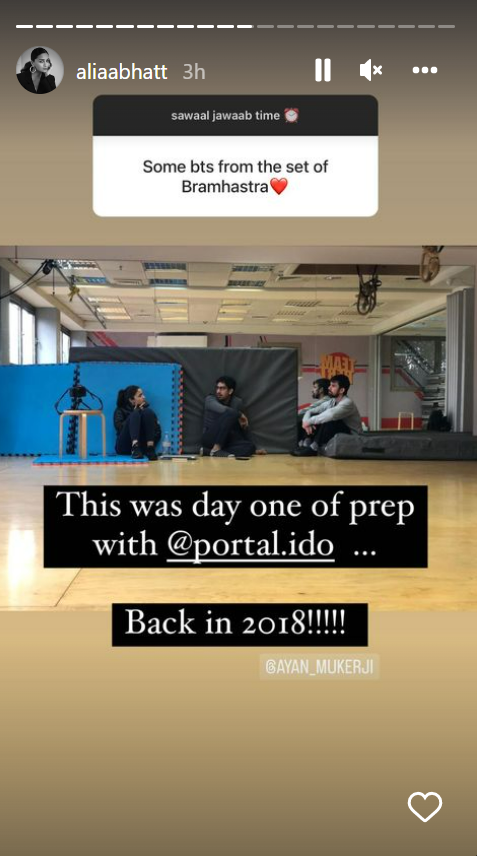