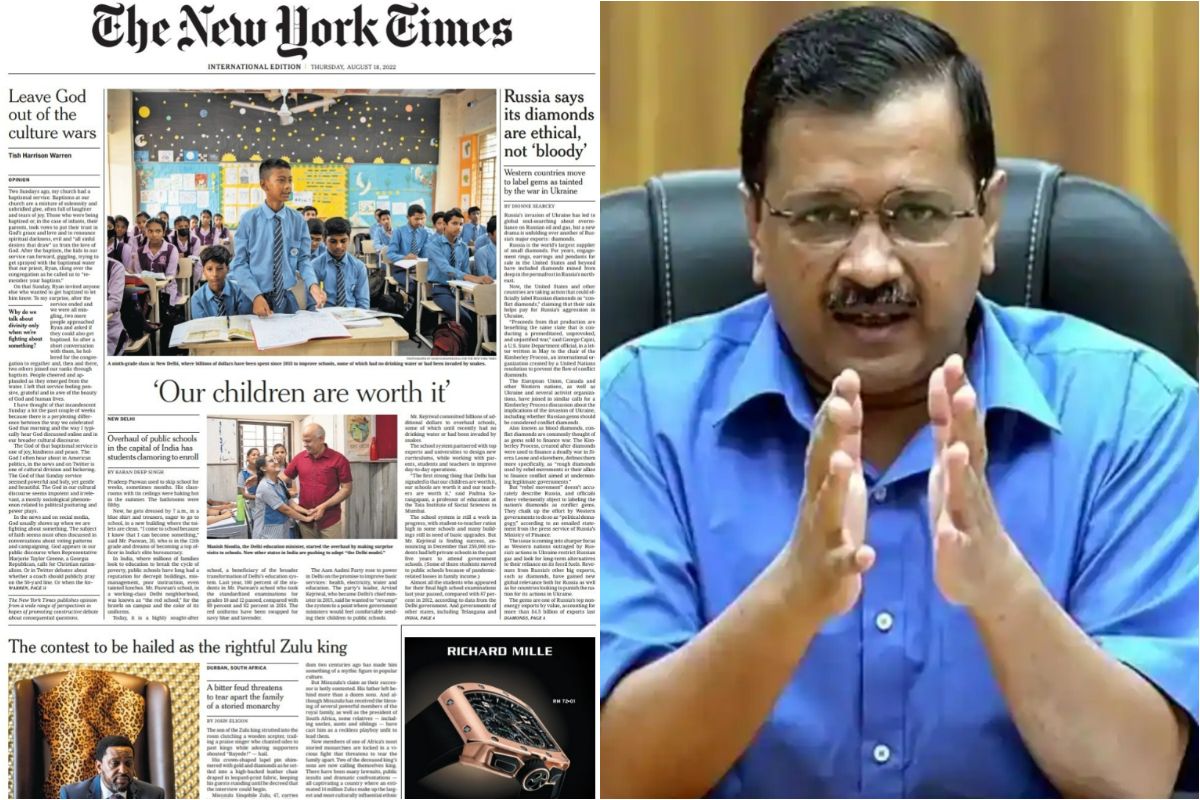 New Delhi: Delhi Chief Minister Arvind Kejriwal lashed out at the CBI raids being conducted against his deputy Manish Sisodia while claiming that it was the result of the AAP government’s good performance which is being appreciated globally. Kejriwal’s remark comes as CBI on Friday morning conducted raids in connection with Delhi Excise Policy 2021-22, at over 10 locations including the residence of Minister Manish Sisodia.Also Read – CBI Raids Sisodia: AAP Supporters Detained, Section 144 Imposed Outside Delhi Deputy CM’s Residence | LIVE

Taking to Twitter, Kejriwal attached the front page of New York Times featuring Manish Sisodia where it reported “overhaul of public schools in Delhi has students clamouring to enroll” in his post. “Delhi has made India proud. Delhi model is on the front page of the biggest newspaper of US. Manish Sisodia is the best education minister of independent India,” Arvind Kejriwal tweeted.

Delhi has made India proud. Delhi model is on the front page of the biggest newspaper of US. Manish Sisodia is the best education minister of independent India. pic.twitter.com/6erXmLB2be

“CBI is welcome. Will extend full cooperation. Earlier also there were raid and probe. Nothing came out. Nothing will come out now also,” Kejriwal said in another tweet.

As CBI raids continued at various locations in connection to Manish Sisodia, Arvind Kejriwal held a presser in Delhi. Kejriwal, while addressing the public, took a swipe at Narendra Modi-led government at the Centre said, “Manish Sisodia was declared the best Education Minister in the world but a CBI team reached his residence to conduct a raid.”

“So, there will be a lot of obstacles. It wasn’t easy to appear on the front page of New York Times and bring an Education Revolution in Delhi,” Kejriwal said.

Kejriwal, who is also the AAP convenor said, “This isn’t the first raid. In the last 7 yrs, several raids were conducted on Manish Sisodia. Several false cases were lodged against him. Raids were conducted on me as well, on Satyendar Jain, on Kailash Gehlot – but nothing was found. They won’t get anything even now.”

“CBI is doing its work, there is no need to be scared. We should let CBI do its work, they have an order from the top to hassle us. Obstacles will come but work won’t stop,” Kejriwal said.