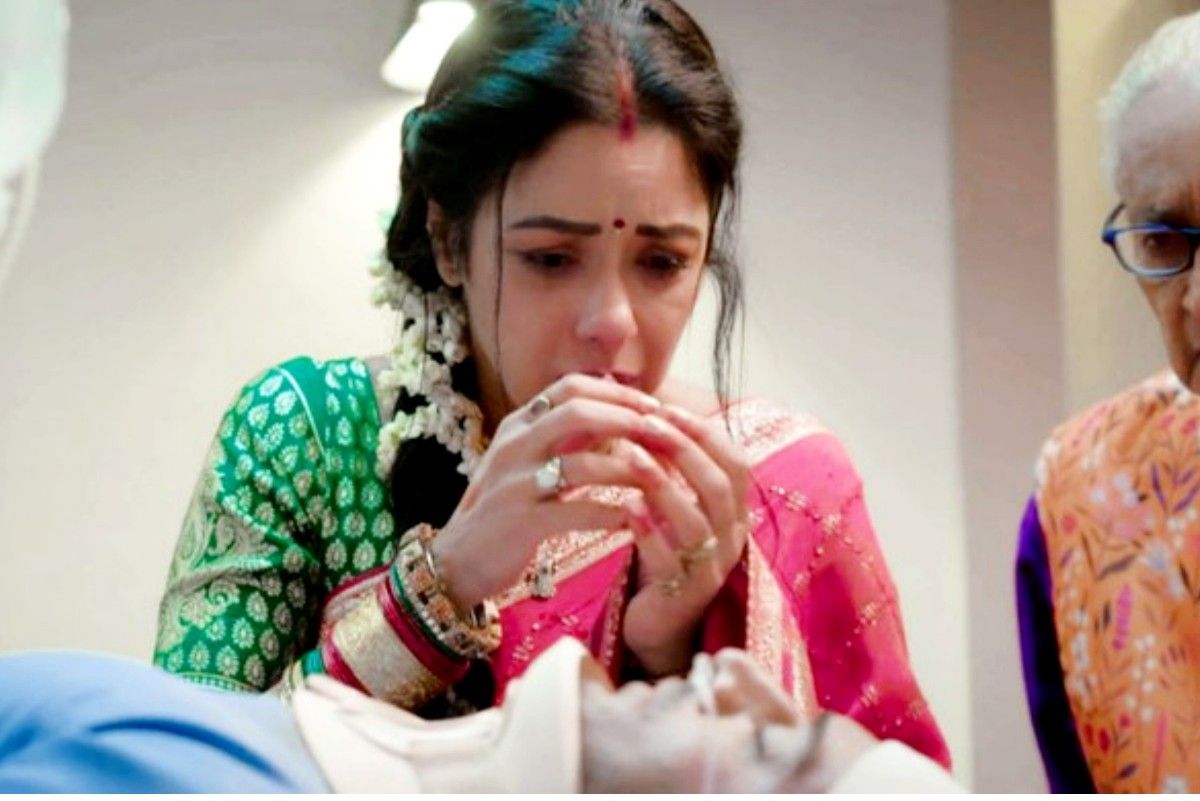 Anupama Written Update, August 12: After the latest episode, the fans couldn’t help but feel pity for Anupama who is currently dealing with a huge loss as her husband lies unconscious following a major accident. The fans of the show are worried to see Rupali investing so much of herself in these emotionally draining scenes as an actor. Many #MaAn fans have been busy sending wishes and prayers her way as Anupama continues to fight the biggest battle ever – getting Anuj Kapadia back to life.Also Read – Anupamaa: Anuj-Anupama to be Thrown Out of Kapadia House? – Deets Inside

One scene that has particularly appealed to the audience from the latest episode shows Anupama trying to hold Anuj’s face when the doctor asks her to not touch him before the surgery. At that moment, she looks at an unconscious Anuj with tears welling up in her eyes. Anupama tries to keep a strong face and tells Anuj that he has to come back from the surgery and he has to keep breathing for her. “Saans lete rahiyega, Anuj…” she says and in that one scene, the fans go emotional realising the depth of Rupali Ganguly’s performance and the purity of Anupama’s relationship. Also Read – Anupamaa: New Samar Aka Sagar’s Latest Video With Rupali Ganguly Goes Viral, Fans Hail Mother-Son Duo | WATCH

Check how the #MaAn fans are reacting to the emotional scene from the latest episode of Anupamaa:

— no prayer of hers has hit me as hard as this did; this was so pure, so honest & she totally surrendered to her kanha ji. #anupamaa • #maan • #anujkapadia pic.twitter.com/EbSYCrZJgp

❝if all else perished, and he remained, I should still continue to be; and if all else remained, and he were annihilated, the universe would turn to a mighty stranger❞ -Wuthering Heights.

— nothing could have described anu better than this. #anupamaa • #maan • #anujkapadia pic.twitter.com/PgFxUZaKuE

— this was excruciating to watch, ngl; to watch anu not only have to see the love of her life, her husband and best friend in such a critical state but her not being able to touch or feel him even for a second? PAIN.#anupamaa • #anujkapadia • #maan pic.twitter.com/zoiqIeUuvz

The better half of her, he’s missing from her and whatever is left of her, it’s left aching for and missing him.

Anuj, the one person you couldn’t ever see even shedding a single tear is now devastated beyond measure … just come back. #anupamaa • #maan • #anujkapadia pic.twitter.com/lrlw8TAQ7w

“Ooo anupama” never broke me so much!!!….yaar can we already get #AnujKapadia back on his feet bhukkad ke jaise 5 seconds 10 seconds ke #MaAn ko I am savouring like mad…legit missing #MaAn too much #GauravKhanna #RupaliGanguly #Anupamaa #Anupama pic.twitter.com/mxNuGWAS3P

— she spoke to him for the first time since the accident and I truly believe that he heard her … he’s gonna keep breathing, keep fighting and eventually come back to his wife and life. #anupamaa • #anujkapadia • #maan pic.twitter.com/9yEU1uBssh

In the current track though, all the fingers get raised at Vanraj after he whispers about the accident in Anupama’s ears and says he pushed Anuj off the cliff but never makes the full confession about the accident. Baa and others then fold their hands in front of Anupama to not report Vanraj to the police.

Seems like the upcoming episodes are full of struggle, grief, challenges and sacrifices for Anupama. Will she be able to make Anuj get back to normalcy? Will she be able to manage the Kapadia empire the way Anuj had asked her to do? Will they get to know what exactly happened at the cliff between Anuj and Vanraj? Watch this space for all the latest updates on Anupamaa!