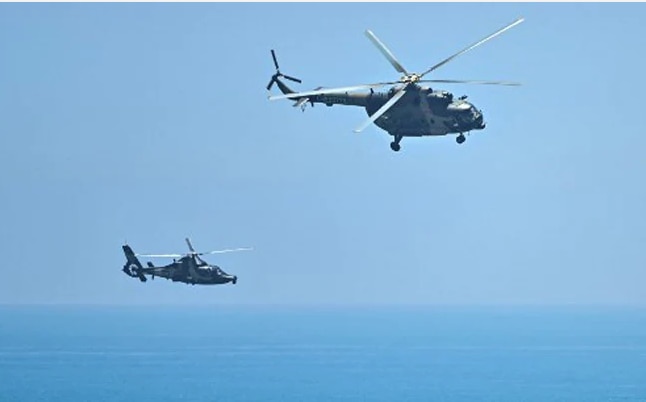 Taipei: As the tensions in the Taiwan strait heightened soon with US House Speaker Nancy Pelosi’s visit to Taiwan, Taipei’s military said 68 Chinese fighter jets and 13 warships crossed the “median line” that runs down the Taiwan Strait during Friday’s military drills by Beijing’s forces.  “(We) condemn the communist military for deliberately crossing the median line of the strait and harassing the sea and air around Taiwan,” the defence ministry said in its latest statement on Friday.Also Read – Chinese Military Drills Encircling Taiwan Undermine Status Quo: Taiwanese President

Taiwan’s defense ministry on Friday said that a total of 68 Chinese military aircraft and 13 navy ships were conducting missions in the sensitive Taiwan Strait and some of them have “deliberately” crossed an unofficial buffer separating the two sides. Also Read – After Pelosi’s Visit, China Conducts ‘Precision Missile Strikes’ In Taiwan Strait. See Pics

“Multiple PLA aircraft and vessels were detected participating in drills around Taiwan Strait and have crossed the median line. #ROCArmedForces have utilized alert broadcast, aircraft in CAP, patrolling naval vessels, and land-based missile systems in response to this situation,” tweeted Taiwan’s Ministry of National Defence. Also Read – Infuriated by Pelosi’s Visit, China Kicks Off Largest Ever Military Exercises in Six Zones Around Taiwan

PLA dispatched 68 aircraft and 13 vessels until 17:00 (UTC+8) for the activities around Taiwan Strait, part of which had crossed the median line and jeopardized the status quo of the strait.

“We condemn such action that disturbed our surrounding airspace and waters and continue to ensure our democracy and freedom free from threats,” added the tweet.

The ministry condemned China in a statement, saying its armed forces have “seriously damaged” the status quo and “harassed” Taiwan’s water and air space.

“We seek no escalation, nor do antagonize others. #ROCArmedForces are committed to #ProtectOurCountry along with our citizens,” added the tweet.

Taiwan Premier Su Tseng-chang blasted what he called “the evil neighbour” after China encircled the self-ruled island with a series of huge military drills that were condemned by the United States and other Western allies.

China is holding threatening military exercises in six zones off Taiwan’s coasts that it says will run through Sunday. Missiles have also been fired over Taiwan, defence officials told state media. The speaker is the highest-ranking US politician to visit Taiwan in 25 years.

China opposes the self-governing island having its own contacts with foreign governments, but its response to the Pelosi visit has been unusually vociferous.

China said Friday that more than 100 warplanes and 10 warships have taken part in the live-fire military drills surrounding Taiwan over the past two days.

The official Xinhua News Agency said Friday that fighters, bombers, destroyers and frigates were all used in what it called “joint blockage operations.”

The Rocket Force also fired projectiles over Taiwan into the Pacific, military officers told state media, in a major ratcheting up of China’s threats to attack and invade the island.

The drills, which Xinhua described as being held on an “unprecedented scale,” are China’s most strident response to Pelosi’s visit.